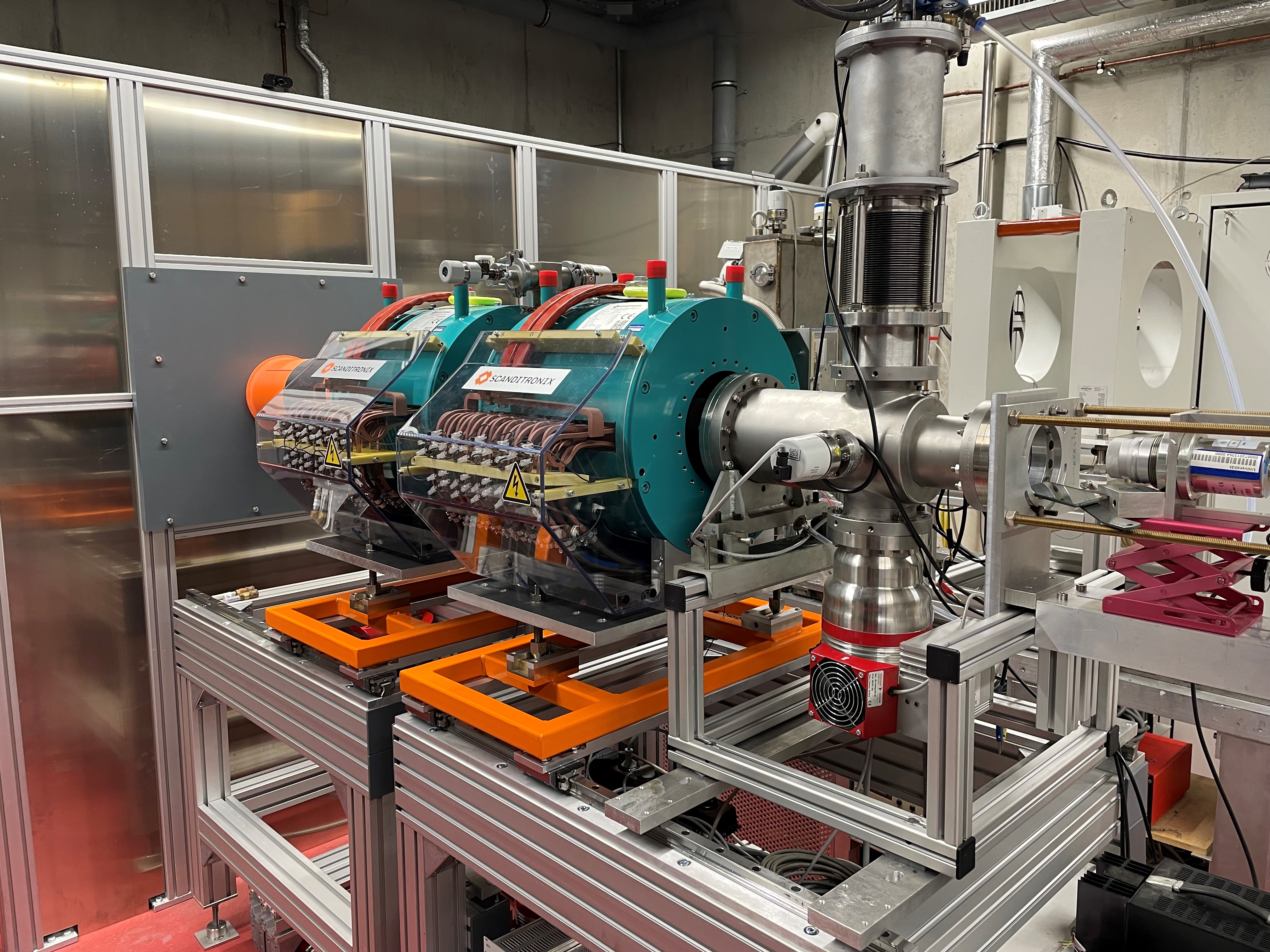 Electron gun test stand at Goethe University Frankfurt. This set-up has been used to perform pyrometric measurements of the hot cathode of the gun, which is located inside the left of the two solenoids (Credits: Kathrin Schulte-Urlichs/GSI/ARIES).

Hadron synchrotrons operating at low energies typically have a fundamental intensity limit determined by space charge, a term summarizing the adverse effects caused by the repulsive force among particles of the same charge in a hadron beam, such as particle tune shift, unacceptable emittance growth, and beam loss. To overcome this limit, space charge can be compensated by superimposing the hadron beam with an intense electron beam inside an electron lens. Such a device creates an electron beam in a gun, guides it by magnetic fields through the overlap region and finally dumps it onto a collector. Temporal and spatial distribution of the electron beam are matched to the hadron bunches by modulation of the current and appropriate shaping of the gun.

Over the past four years, a prototype electron gun for an electron lens for space charge compensation has been developed by four collaborators to the ARIES project: GSI, Goethe University Frankfurt, Riga Technical University, and CERN. Now to be integrated into a prototype lens for the FAIR facility, it could pave the way for pushing the space charge limit of hadron synchrotrons.

Located at GSI, in Darmstadt, Germany, the FAIR facility, presently under construction, will host two heavy ion synchrotrons, the operational SIS18 and the future SIS100. The intensity of both synchrotrons is limited by the incoherent space charge tune shift at injection, a shift in the transverse betatron oscillation frequencies of individual particles proportional to the local line density of the circulating bunches. Anticipating experimentalists’ ever growing demands for higher intensities, GSI launched in 2016 a project for the development of electron lenses for space charge compensation in the FAIR synchrotrons to increase intensities by a factor two. Ultimately, three electron lenses will be required in either ring to preserve symmetry in the presence of the strong transverse focusing created by the electron beam.

In the first step, a prototype electron lens for demonstrating the concept in SIS18 shall be built. Considering beam parameters and machine cycles of SIS18, this lens needs to provide a beam with a current density of 0.5 A/ cm2 over a beam cross section of 40 cm2, co-moving with the ion beam over a length of 3.3 m. To match ion bunch profiles, the current needs to be modulated at frequencies up to 1 MHz with a bandwidth of 10 MHz while preserving the transverse shape. Since the magnetic fields of the lens have practically no influence on the shape of the electron beam distribution, these are actually requirements on the gun as the most important component of an electron lens for space charge compensation.

The corresponding RF-modulated electron gun was realised within the scope of the ARIES work package 16 (Intense RF-modulated electron beams). The gun employs thermionic emission from a hot tungsten cathode at up to 30 kV extraction voltage. Adopting the geometry of a volume ion source, a compact and robust design tolerating the high temperatures created by plasma heating was devised. Modulation is achieved by means of a grid close to the cathode, which is a novel concept in the context of electron lenses. With 3 kV sufficing to suppress electron emission, it reduces the power requirements on the modulator drastically over direct modulation of the extraction voltage. The challenging bandwidth of the modulator was achieved by adopting a multi-level RF inverter topology. Twenty-six stages, each supplying 150 V, are combined to sample the desired waveform after proper filtering of the output voltage. Gun and modulator were already tested in several prototype stages at Goethe University Frankfurt, where a dedicated test bench was set up for commissioning and characterization of the gun.

At the time of this writing, the test program is still ongoing owing to delays incurred as a consequence of the Covid-19 crisis. Though the full performance of the gun could not be demonstrated yet, the results obtained so far are very encouraging. In the coming years, the electron gun will be integrated into the prototype lens for SIS18, with the aim of demonstrating for the first time the principle of space charge compensation with electron lenses in a bunched hadron beam.

The FCC-ee vacuum system, towards prototyping