The production of very-high energy electron beams for radiotherapy was the subject of the VHEE2020, an international workshop that took place 5-7 October 2020, organised by CERN.

By Luke Dyks (U. Oxford), Manjit Dosanjh (CERN, U. Oxford) 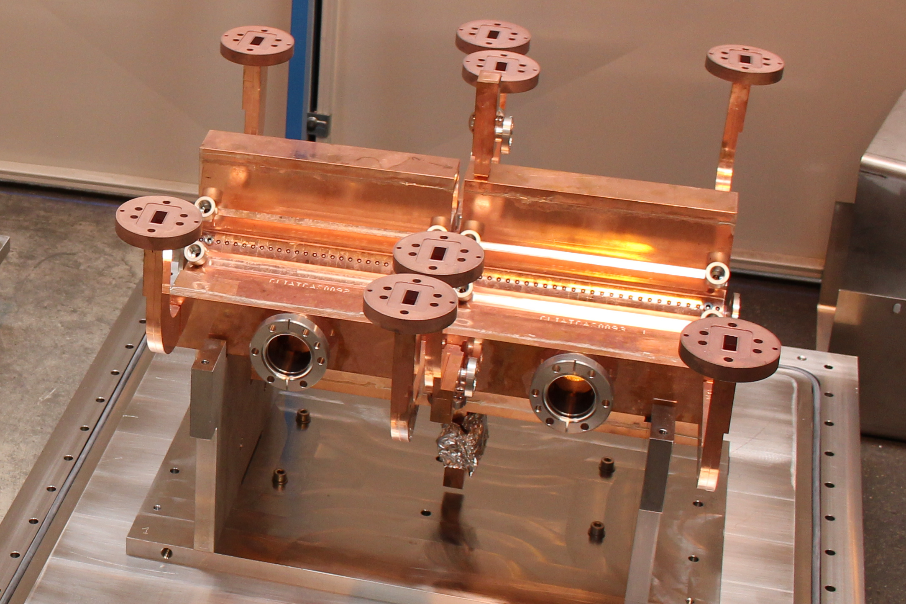 Establishing innovative treatment modalities for cancer is a major 21st century health challenge since cancer will become the leading cause of death worldwide by 2040.  Radiotherapy (RT) is a fundamental component of our current ability to effectively treat tumours and control their growth. The most common form of RT involves the use of x-rays to treat the tumour, while  proton and ion beams have been used to treat deep-seated tumours, whilst reducing the damage to surrounding healthy tissue. Although accelerated electrons are widely used to generate X-rays for RT, electrons are less frequently used directly, because low energy electrons have limited penetration range and are mostly meant for the treatment of superficial tumours, thus limiting their clinical applicability.

In parallel, the idea of investigating the use of very high-energy (50-250 MeV) electron (VHEE) beams for RT has gained interest, since electrons with higher energies can travel deeper into the patient. The advantages of VHEE are that the depth–dose profile from the electrons is flatter than the quasi-exponential dose given by X-rays; and in addition – in principle – the delivered electrons may be focused and steered in ways that are not possible for X-rays. One other potential benefit is that VHEE can operate at very high dose rates, possibly compatible with the generation of the FLASH effect. The challenge has been the difficulty in obtaining high-energy electrons using compact accelerators.  However, the development of high-gradient cavities for linear colliders, such as the Compact Linear Collider (CLIC), has meant that using VHEE beams for RT has become a feasible possibility.

Due to this increase in interest, the production of VHEE beams for RT was the subject of the VHEE2020 International Workshop, which took place 5-7 October 2020, organised by CERN. More than 400 scientists with diverse backgrounds, from clinicians to biologists and accelerator physicists to dosimetry experts, gathered virtually to evaluate and discuss the perspectives of this novel technique. This workshop followed a similar one organised in 2017 in Daresbury; the large increase in attendance demonstrates the increasing interest in the field.

Topics covered by leaders in the field ranged from state-of-the-art, technological advances and biological and clinical aspects, to what is needed to exploit VHEE for RT and FLASH clinically and the future industrial perspective for the field.

Many challenges, both technological and biological, have to be addressed for the ultimate goal of using VHEE and VHEE-FLASH as an innovative modality for effective cancer treatment, with minimal damage to healthy tissues. All of these topics were thoroughly discussed in the different sessions of VHEE2020. Talks given in the workshop outlined the current state of research in the VHEE field, successful studies that had been undertaken into VHEE and FLASH RT, challenges faced by researchers in recent years, and the outlook for the field.

It was clear from the discussion that VHEE has the potential to provide a major input in our quest to fight cancer globally, but that many challenges have to be overcome first.

For example, current preclinical trials into the efficacy of FLASH-RT, both on animal subjects and humans, have shown exciting results, with potentially significant advantages in the treatment of tumours compared to conventional RT.  However, it was noted that these results must be taken with caution, as they only involved low-energy electron beams, which would not allow the treatment of deep seated tumours.  One of the key aims set out for the future was to extend these experimental studies into the VHEE regime.

From the accelerator-technology point of view, an important aim is to assess the possibility of focusing and transversely scanning the beam, thereby overcoming the disadvantages associated with low energy electron and photon beam irradiation. In particular, for VHEE-FLASH, it will be necessary to ensure that the biological effect is maintained. Another major challenge for VHEE-FLASH is the delivery of a very high dose-rate, possibly over a large area, providing a uniform dose distribution to the target. The stability, reliability and repeatability are other mandatory ingredients for accelerators to be operated in a medical environment, and so must be studied further. Of particular importance is the development of reliable on-line dosimetry for very high dose-rates, a regime not adapted to the standard dosimetry techniques currently used in RT.

From a more general perspective, the parameter window in which the FLASH effect takes place has still to be defined thoroughly, as well as its effectiveness as a function of the physical parameters of the electron beam. Finally, a clear understanding of the underlying biological processes will likely prove to be essential, in order to optimise fully the FLASH RT technique.

For these challenges to be met, a lot of future work must go into using test beam facilities to characterise experimentally and assess properties of VHEE beams and their ability to produce the FLASH effect. It is also important to demonstrate that the properties of the electron beams are independent of the way they are produced (RF linac or LPA technologies). A number of experimental test facilities are already available to perform these ambitious objectives: the CERN Linear Electron Accelerator for Research (CLEAR), so far unique in being able to provide both high-energy (50-250 MeV) and high-charge beams. VELA-CLARA at Daresbury, PITZ at DESY, and ELBE-HZDR using the SC RF technology at Dresden are becoming available.

“For me, as a young researcher, it’s very exciting to be working in a field that is so dynamic. Some of the ideas discussed at the workshop have great promise and I feel privileged to have to opportunity to contribute to their development. I can’t wait to get my teeth into them!”

Despite the number of necessary developments highlighted at the meeting, there was an air of cautious optimism that a well-directed, consistent effort to understand the physical processes underlying VHEE-RT and FLASH will allow the community to overcome the challenges, and that operational medical VHEE facilities could be designed and built in the future.