The 2022 FCC Week brought together more than 250 collaborators from 30 countries to discuss the latest status of the FCC Feasibility Study, that was launched by the CERN Council in 2021 in response to the 2020 European Strategy Update. 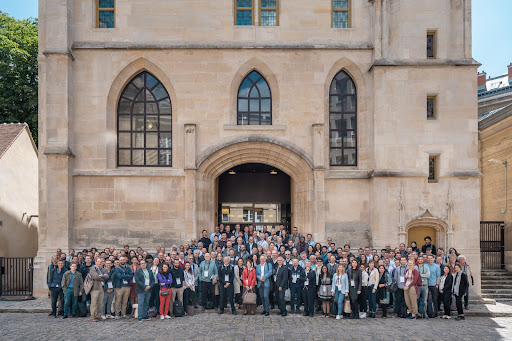 The annual meeting of the Future Circular Collider (FCC) Collaboration was hosted, for the first time, as a hybrid event, since the covid-19 pandemic still affected travel in various regions.

The week of 30 May 2022 saw the annual meeting of the Future Circular Collider collaboration in Paris at Sorbonne Université. Taking place in a hybrid format, the event gathered more than 500 participants from over 30 countries to review the latest status of the FCC accelerator and detector studies and the progress towards the completion of the FCC Feasibility Study that will inform the next Update of the European Strategy, expected for 2026/27.

During the one week long FCC meeting, a particular focus was the accelerator design of the lepton circular collider (FCC-ee), that could serve not only as a high-luminosity Higgs factory, but also as a unique laboratory for a wide range of electroweak precision measurements, and as a powerful engine for dark-matter searches. FCC Week 2022, also hosted a variety of sessions on detector development and optimisation, ongoing territorial and geological site investigations as well as new results and future prospects of physics studies. The opening featured welcome addresses from Ursula Bassler (CNRS), Philippe Chomaz (CEA) and Fabiola Gianotti (CERN’s Director-General). Fabiola Gianotti recalled the main arguments that guide and underpin the work of the FCC collaboration. The first is related to the 2020 Update of the European Strategy, that clearly identified an electron-positron Higgs factory as the highest priority post-LHC collider, while also stating that in the longer run Europe should have the ambition to operate a proton-proton collider at the highest possible collision energy. The second, is the challenge of studying the feasibility of such a complex of accelerators, which is being carried out in collaboration with CERN’s international partners as a global endeavor. She reported that the funding for the FCC Feasibility Study has been secured as part of CERN’s Medium-Term Plan while its organizational structure was approved in 2021. The opening plenary session of the conference offered strategic visions by Eliezer Rabinovici (President of CERN’s Council),  Florencia Canelli (ETH, Zurich; Swiss scientific delegate to the CERN Council) and Anne-Sabelle Etienvre (University Paris-Saclay, French scientific delegate to the CERN Council), as well as by Jean-Eric Paquet (Director-General at the EC in charge of Research and Innovation), who presented the European Commission’s policy and vision on future large-scale research infrastructures. He referred to the indispensable value of fundamental research and the need for long-term investing in Europe’s scientific capacity.

FCC Week 2022 offered a great opportunity to showcase the numerous ongoing efforts to improve the overall efficiency and to achieve, or exceed, the target performance in terms of beam current and luminosity. The breadth of new results and the extrapolated performance demonstrate that the FCC-ee is much more than a scaled-up version of the previous LEP collider, in terms of both physics potential and technologies. The FCC-ee can repeat the entire LEP physics programme within a one or a few minutes. It will offer exceptional energy precision on the Z pole and at the W threshold. And, of course, it allows access to the Higgs boson and to the top quark pair production threshold, which were beyond the reach of LEP. Key FCC-ee technologies for improved efficiency include higher-efficiency continuous wave (CW) radiofrequency (RF) power sources (klystrons and/or solid state), high-Q SC cavities for the 400–800 MHz range, and several possible applications of high-temperature superconductor (HTS) magnets.

In addition to the various RF systems, which are the underpinning key technology of the FCC-ee collider, another major component of the FCC-ee is the regular arc, in view of its length. The arc cells must be cost effective, reliable and easily maintainable. Therefore, as part of the FCC R&D programme it is planned to construct, by 2025, a complete arc half-cell mock up including girder, vacuum system with antechamber and pumps, dipole, quadrupole and sextupole magnets, beam-position monitors, cooling and alignment systems, and technical infrastructure interfaces.

In parallel to the baseline technology choices, the FCC collaboration is pursuing the development of alternative technologies that could have a significant societal impact. One example is the use of high-temperature superconductor (HTS) materials for the FCC-ee final focus quadrupole and sextupole magnets and/or for the arc short-straight sections. This option could lower energy consumption by 80-90% and increase operational flexibility. Efforts in this direction are supported by two projects that were recently approved by CHART, the Swiss accelerator R&D programme, as well as by the EU-funded H2020 FCCIS design study.

In a second step, the FCC-ee tunnel could host a 100 TeV hadron collider, FCC-hh. To prepare for the FCC-hh, the present layouts of both machines feature a common footprint. CERN’s High-Field Magnet programme addresses the challenge of developing high-field dipoles as well as quadrupoles, for the future hadron collider. Several important milestones were accomplished in the development of high-field Nb3Sn magnets. At CERN, a block coil magnet, FRESCA2, with a 100 mm bore, achieved a world-record field of 14.6 T at 1.9 K. In the United States, a Nb3Sn cosine-theta accelerator dipole short-model demonstrator with 60 mm aperture, reached a similar field of 14.5 T at 1.9 K. In addition to Nb3Sn wire, also high-temperature superconductors (HTS) are of interest, since they might allow for higher fields, operation at higher temperature, and, ultimately, perhaps even lower cost. In this context, the FCC conductor programme has been exploring the potential of REBCO coated conductors (CCs). In particular, the critical surfaces for the current density, Jc(T, B, θ), of coated conductors from different industrial manufacturers have been studied.

Following the 5th FCC Physics Workshop in Liverpool, the FCC Week also offered the opportunity to reflect on the  status and achievements of FCC Physics Experiments and Detector studies. Talks from all Physics, Experiments and Detectors (PED) Working groups covered the physics opportunities as well as ongoing R&D on Detector Concepts and Physics Software and Computing. The meeting also covered the progress of the FCC-ee Accelerator-Experiment working groups, namely on machine-detector interface (MDI) and on centre-of-mass energy calibration, polarization and monochromatisation (EPOL).

The diversity of participants and the high number of junior researchers attending the meeting are strong signs that a visionary project like FCC might ensure that Europe maintains its “continued scientific and technological leadership” in accelerator-based particle physics and related technologies. Following the 2022 EPPSU, the FCC collaboration has continued its growth. New partners from CERN’s member states and around the globe were attracted to forge new synergies, in line with the goals of the Feasibility Study. FCC Week 2022 revealed tremendous progress across all study areas. The successful completion of the FCC Feasibility Study (2021–2025) is likely to be a crucial milestone for the future of CERN and for the field of High Energy Physics.

I.FAST under the spotlights at IPAC’22

Reverse coating: a new method for the product...

From LEP to the FCC-ee, a great leap in preci...