Flexibility and versatility, together with a dynamic and experienced team of researchers, are key ingredients for the success of the new CLEAR facility, exploring novel accelerator concepts at CERN. 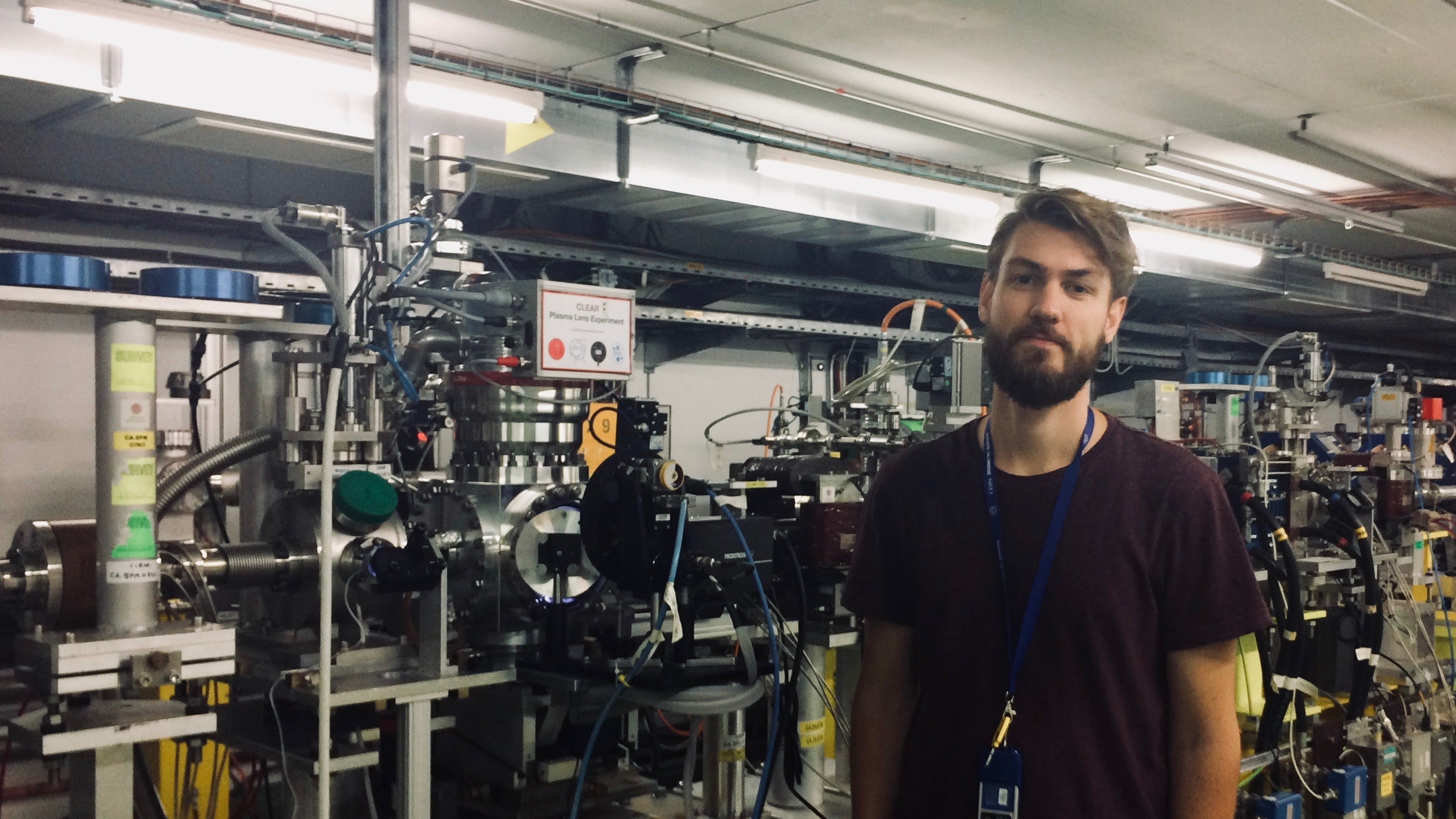 The plasma lens experiment after being fully installed in the CLEAR beamline (Image: Wilfrid Farabolini - Wilfrid.Farabolini@cern.ch)

Linear accelerators are also the only viable solution for electron-positron colliders at the high-energy frontier. In this case, high gradient technologies allow for cost optimisation and/or for maximizing the energy reach of such machines.

The CERN Linear Electron Accelerator for Research (CLEAR) facility at CERN was set up to expand the testing capabilities of those ideas and technologies and to provide on top the possibility to perform direct measurement with beam of machine components and training of young scientists.

The new CLEAR facility at CERN started its operation in fall 2017. CLEAR results from the conversion of the probe beam line of the former CLIC Test Facility (CTF3) into a new testbed for general accelerator R&D and component studies for existing and possible future accelerator applications, such as X-band structures, plasma and THz technology, nm- and fs-resolution beam instrumentation, sub-ps bunches production, but also for investigating possible use of electron beams for medical purposes or electrical component sensitivity to radiation.

The hardware modifications implemented in 2017 to the existing infrastructure allowed to provide stable and reliable electron beams with energies between 60 and 220 MeV in single or multi bunch configuration at 1.5 GHz.

CLEAR inherited not only the equipment, but also the experience of from operating the previous CTF3 facility: the first beam was set up in August 2017 and, after only a few weeks of commissioning, users could take the first beams to perform experiments in September.

The first CLEAR beam was used for the continuation of the irradiation tests performed on the Very energetic Electron facility for Space Planetary Exploration missions in harsh Radiative environments (VESPER), which was set up at the end of the CALIFES beamline already during the CTF3 era.

VESPER was initially set up to characterise electronic components for the operation in a Jovian environment – as foreseen in the JUpiter Icy Moon Explorer mission (JUICE) of ESA, in which trapped electrons of energies up to several hundred MeVs are present with very large fluxes.

Initial measurements showed the first experimental evidence of electron-induced single event upsets (SEU) on electronic components, pointing to the necessity of extending such an investigation to different electron energies. The CLEAR flexibility allowed to continue the study, showing a dependency of SEU cross-section with energy. Instead, no dependency was observed on radiation flux, suggesting that such components do not suffer from prompt dose effects.

A wider range of devices has also been tested, showing a strong dependency on the device process technology. Preliminary test on a set of memories sensitive to latch-up, a type of short circuit which disrupts the proper functioning of the memory, has also shown that electrons can cause destructive events. Further tests on 16 nm FinFET technology devices were performed by ESA and their contractors IROC in March 2018 and the data are now being analysed.

The scope of VESPER was extended to dosimetry for medical applications.

Understanding the dosimetry of such beams is essential in order to assess their viability for treatment. For this reason a group from the University of Manchester carried out studies in the VESPER installation on energy deposition using a set of EBT3 Gafchromic films submerged in water. The measured dose deposition profile was in agreement with Monte Carlo tracking simulations within 5%. At the same time, the possible aberration of crossing in-homogenous bodies was investigated by measuring the longitudinal dose profiles with and without inserts of various density material. The results confirmed the expectation from simulations that electron beam are relatively unaffected by both high-density and low-density media.

The obtained results indicated that VHEE has the potential to be a reliable mode of radiotherapy for treating tumors also in highly inhomogeneous and mobile regions such as lungs.

Further studies on the dose distribution of a converging beam as opposed to a parallel wide beam, and possibly on multi-angle irradiation are planned for the future.

CLEAR opened the possibility of exploring also new accelerator technologies, one being active plasma lenses which are a promising technology for strongly focusing particle beams. Their compact size is a plus for potential use in novel accelerators. However, transverse field uniformity and beam excitation of plasma wake-fields may turn out to be significant limitations.

Lead by the University of Oslo, a collaboration between CERN, DESY and Oxford University was set up to develop a novel low-cost, scalable plasma lens. The developed setup consists of a 1 mm diameter, 15 mm long sapphire capillary installed in the middle of a 20x20x20 cm3 aluminum vacuum chamber. The capillary is filled with He or Ar at a controllable pressure. The gas is ionized by a 500 A peak current discharge with a duration of up to a few hundred ns, provided by a 20 kV spark-gap compact Marx bank generator. The longitudinal discharge current is responsible as well for the transverse focusing force in both transverse planes.

The experimental set-up was installed in the CLEAR beamline in September 2017 and after a fast commissioning it was possible to show a clear focusing effect. Extensive measurements were taken during December 2017 and March 2018. Transverse position scans of a pencil beam revealed gradients as high as 350 T/m, which would be compatible with its use for a staged plasma accelerator. More studies are now being conducted for measuring the uniformity of the field and beam emittance preservation also employing different gas species.

Moreover, evidence of non-linear self-focusing at relatively high bunch charge (∼50 pC/bunch) was observed when the beam goes throw the plasma after the discharge. This opens another branch of possible studies on passive plasma lenses that will be further developed.

Another technology being explored at CLEAR is the possibility of producing terahertz radiation (1 THz corresponds to 4 meV photon energy, or 300 µm radiation wavelength). This technology has a strong impact in many areas of research, spanning the quantum control of materials, plasmonics, and tunable optical devices based on Dirac-electron systems to technological applications such as medical imaging and security.

The aim at CLEAR is to characterize a LINAC-based THz source, exploiting relativistic electron bunches which emit coherent radiation in the THz domain. For such a source sub-picosecond electron bunches are needed. This triggered a study and optimisation of the CLEAR injector in collaboration with the “Laboratoire de l'Accélérateur Linéaire” (LAL), thanks to which sub-ps bunches down to 200 fs rms have been demonstrated in the machine, paving the way to the THz radiation generation.

The current studies at CLEAR are focused on the production of (sub-)THz radiation by Coherent Transition Radiation (CTR), i.e. making the electron beams passing through thin metal foils and collecting the emitted radiation. With this technique, a peak power of about 1 MW at 0.3 THz have been measured, in agreement with theoretical expectations.

Further experimental tests have been started for producing THz radiation by Coherent Smith-Purcell Radiation (CSPR) targets, where the electron beam passes nearby a periodic structure, emitting radiation at harmonics of its period.

CLEAR allows to continue the R&D for CLIC technologies, for example by measuring the resolution of CLIC cavity Beam Position Monitor prototypes and by verifying the behavior of the Wake Field Monitor installed on the present design of the CLIC accelerating structures.

Additionally, CLEAR serves as unique opportunity for fast verification of beam instrumentation, e.g. it was possible to perform first calibration of the scintillator screen used in the electron spectrometer of the AWAKE experiment.

Finally, CLEAR offers also a unique playground for young accelerator physics. During march 2018 part of the students from the Joint Universities Accelerator School (JUAS) had the opportunity of spending one day at the facility performing hands on experiments.