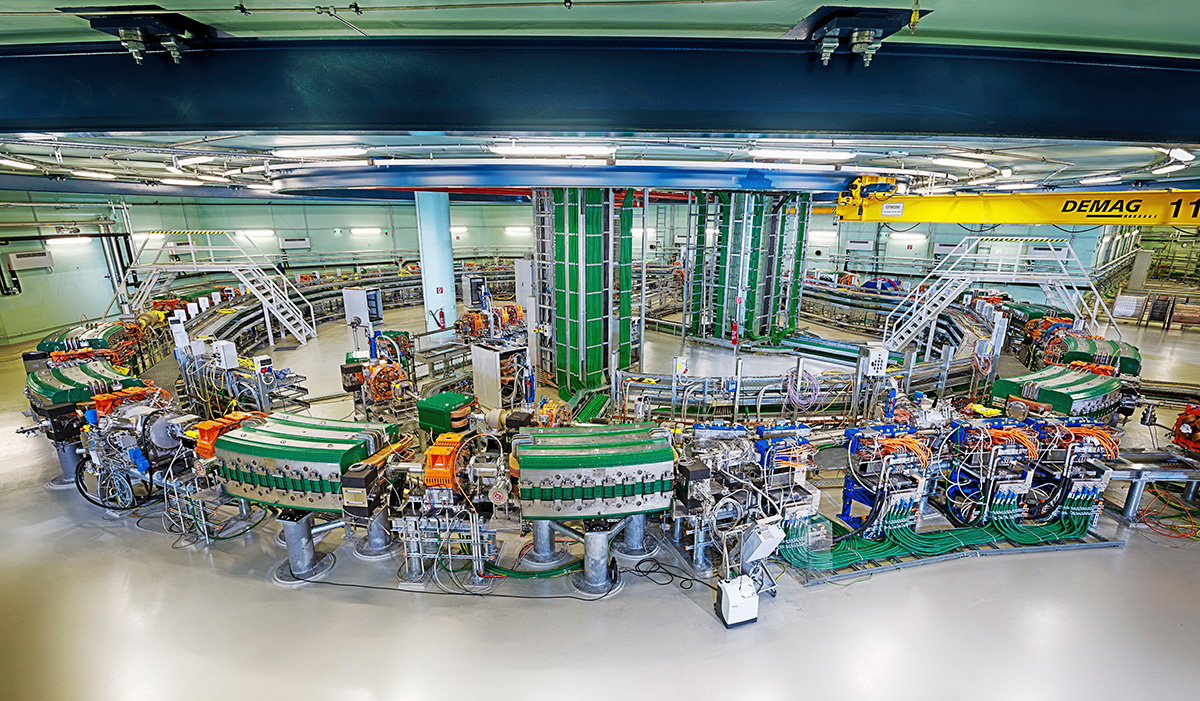 The MedAustron proton/carbon-ion synchrotron was constructed in collaboration with CERN, the TERA Foundation, INFN and the CNAO Foundation, with help from PSI. (Image: MedAustron)

A CERN-based effort to bring about the next generation of hadron-therapy facilities has obtained new funding from the European Commission (EC) to pursue technology R&D. CERN’s Next Ion Medical Machine Study (NIMMS) aims to drive a new European effort for ion-beam therapy based on smaller, cheaper accelerators that allow faster treatments, operation with multiple ions, and patient irradiation from different angles using a compact gantry system. Its predecessor the Proton-Ion Medical Machine Study (PIMMS), which was undertaken at CERN during the late 1990s, underpinned the CNAO (Italy) and MedAustron (Austria) treatment centres that helped propel Europe to the forefront of hadron therapy.

“Over the past three years we have collected about €4 million of EC contributions, directed to a collaboration of more than 15 partners, representing about a factor of eight leverage on the original CERN funding,” says NIMMS project leader Maurizio Vretenar. “A key achievement was the simultaneous approval of HITRIplus and IFAST because they contain three strong work packages built around the NIMMS work-plan and associate our work with a wide collaboration of institutes.”

A major NIMMS partner is the new South East European International Institute for Sustainable Technologies (SEEIIST), an initiative started by former CERN Director-General Herwig Schopper and former minister of science for Montenegro Sanja Damjanovic, which aims to build a pan-European facility for cancer research and therapy with ions in South East Europe (CERN Courier March 2018 p5). CNAO and MedAustron are closely involved in the superconducting gantry design, CIEMAT in Spain will build a high-frequency linac section, and INFN is developing new superconducting magnets, with the TERA Foundation continuing to underpin medical-accelerator R&D.

Also successful in securing new Horizon 2020 funding is a project built around CERN’s MEDICIS facility, which is devoted to the production of novel radioisotopes for medical research together with institutes in life and medical sciences. The PRISMAP project (the European medical isotope programme) will bring together key facilities in the provision of high-purity-grade new radionuclides to advance early-phase research into radiopharmaceuticals, targeted drugs for cancer, “theranostics” and personalised medicine in Europe.

MEDICIS is now concluding its programme with the separation of 225Ac, a fast-emerging radionuclide for the rising field of targeted alpha therapy.

A successful programme towards this goal was developed by MEDICIS during the past two years, with partner institutes providing sources that were purified on a MEDICIS beamline using mass separation, explains Thierry Stora of CERN. “Our programme was particularly impressive this year, with record separation efficiencies of more than 50% met for 167Tm, the first medical isotope produced at CERN 40 years ago with somewhat lower efficiencies,” he says. “It also allowed the translation of 153Sm, already used in low specific activity grades for palliative treatments, to R&D for new therapeutic applications.” MEDICIS is now concluding its programme with the separation of 225Ac, a fast-emerging radionuclide for the rising field of targeted alpha therapy. “Isotope mass separation at MEDICIS acted as a catalyst for the creation of the European medical isotope programme,” says Stora, who leads the MEDICIS facility.

Together with other project consortia, the MEDICIS and HITRIplus teams are also working to identify the relevance of their research for the EC’s future cancer mission, which is part of its next framework programme, Horizon Europe, beginning this year.

Two further EC Horizon 2020 projects launched by CERN – AIDAinnova, which will enable collaboration on common detector projects, and RADNEXT, which will provide a network of irradiation facilities to test state-of-the-art microelectronics – were approved in November. “These results demonstrate CERN’s outstanding success rate in research-infrastructure projects,” says Svet Stavrev, head of CERN’s EU projects management and operational support section. “Since the beginning of the programme, Horizon 2020 has provided valuable support to major projects, studies and initiatives for accelerator and detector R&D in the particle-physics community.”

The miniature accelerator: dream or reality?

AWAKE sows the seeds of controlled particle a...